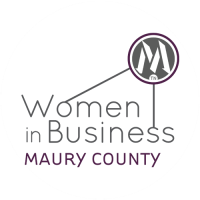 $20 for members
$25 for non-members
Includes lunch
If your business is a Chamber member and you are not receiving member pricing, please contact Caroline at cmcbroom@mauryalliance.com or 931-388-2155 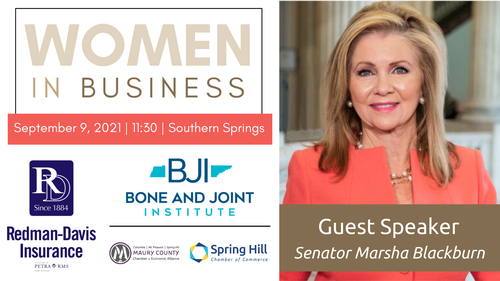 About the Speaker:
Marsha Blackburn was elected to the U.S. Senate in 2018, and is currently serving her first term representing the state of Tennessee. Before her election to the Senate, Marsha represented Tennessee’s 7th Congressional District.

Marsha’s public service is dedicated to promoting opportunities for women and making America a more prosperous place to live. Marsha’s leadership philosophy is based on her experiences in the private sector as a small business woman and author, as well as being a mother and grandmother.

She then became Director of Retail Fashion and Special Events for the Castner Knott Company, which was a Nashville-based regional department store. Later, Marsha founded her own business, Marketing Strategies, which focused on the retail marketplace, as well as electronic and print media.

Marsha began her career in public service in 1995 when she was named executive director of the Tennessee Film, Entertainment, and Music Commission. In 1998, she was elected to the Tennessee State Senate. In the state legislature, she earned a reputation for fiscal responsibility and government accountability by identifying waste and offering realistic solutions to Tennessee’s budget challenges.

While serving in the Tennessee Senate, Marsha led a statewide grassroots campaign to defeat a proposed state income tax. The tax was defeated, and Marsha’s leadership earned her a reputation as an anti-tax champion. In 2014, the people of Tennessee passed an amendment to the state constitution to expressly prohibit a state income tax – a fitting cap to a 14-year battle.

In 2002, Marsha was elected to represent the people of Tennessee’s 7th Congressional District based on her record in the state legislature. She brought her Tennessee values to Washington, DC, and became a leader in the fight for small, efficient federal government that is accountable to its citizens. As a Congressman, Marsha was often selected by her colleagues to lead the charge for principled conservativism. Her congressional career was also noted for her Chairmanship of the Energy and Commerce Committee’s Subcommittee on Communications and Technology, as well as bipartisan expertise in defending songwriters’ and performers’ rights.

Marsha is a member of numerous charitable organizations and is an active member of her church, Christ Presbyterian. Marsha and her husband Chuck live in Williamson County, Tennessee. They have two children, Mary Morgan (Paul) Ketchel and Chad (Hillary) Blackburn, two grandsons, and a granddaughter. Originally from Laurel, Mississippi, Marsha is a graduate of Mississippi State University. 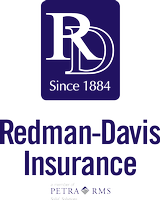